Overnight flights are not my favorite. Ideally, you’d get a little nap in, then sleep a bit on the plane and be more or less good to go whenever and wherever you land. I’d spent the day running around doing last-minute things and packing up so a nap was not in my plans. Plus, I was seriously excited and ready to get going – I wouldn’t have been able to nap even if I had gotten the opportunity. We [finally] left the house around 4:30 to drive to Newark where we were going to park the truck and ride to the airport with Reed and Steve, two of our travelling companions who work for the company responsible for this adventure in the first place. I knew they were my kind of guys when our first order of business after checking in at the airport was to find a bar. 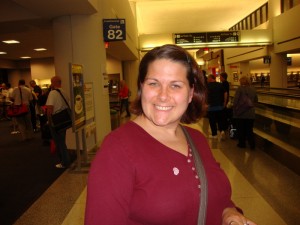 We found a bar. And then we found another bar after discovering that our flight was delayed. In time, we boarded our plane and it was [mercifully] half-empty which meant we didn’t have to share our row with the weird man who was originally seated next to me. I’m not sure what his deal was, but he was one of those dudes whom you see in line to board the plane and you think to yourself “gosh, I hope he’s not sitting next to me.” Well, he was. But he was able to move to a different row so I got a window seat after all. Turns out, a window seat on an overnight trans-Atlantic flight is pretty useless. Who knew? 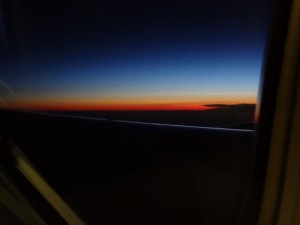 Sunrise, taken from the plane

We first landed in Edinburgh. During a three-hour layover, we gathered more people and I discovered that I was not the only woman in the party, hurrah! Not that it would have been a problem, exactly (I have never had trouble being just one of the guys), but it was nice to have another lady along. I fear I was not the most cheerful at this point, since I wasn’t able to sleep on the plane (I tried) and I was just really hanging on by a thread. The coffee we’d acquired at the beginning of the layover was having the wrong/opposite effect. Luckily, I was able to catch a quick nap on the short flight to Stornoway. 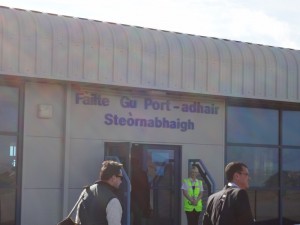 Some of the signs on the island were in English and Gaelic, but most of them were only Gaelic. It’s no secret that I am a big fan of Great Britain and her people, and my dearest wish (aside from just picking up and moving there) is to have a pet Englishman to hang out with me and talk at me all the time. My hearing difficulties do make it difficult to understand people, but once I tune into the music of the accent, it’s easier. The Scots accent was a little tougher to handle, and if we got two or more of them talking to one another, I was a goner. 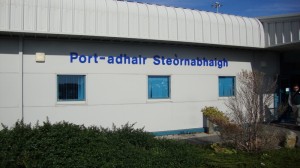 After we collected our baggage, we were introduced to Innes, who is the estate manager (or equivalent) who was going to be driving us from the airport to the castle. He does approximately 34098 other things around the estate as well.

The drive was twisty and turny and the majority of the road was one lane or less. I was able to get a very good look at the countryside and was surprised to see that there were very few trees. Lots of granite sticking out, but nary a tree in sight. There were a couple of areas with some scrubby pine trees and some things that looked like they might have wanted to be trees but were exhausted from the effort and decided to just be bushes instead. 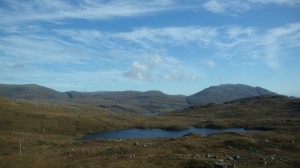 The view from the road

We arrived. Words don’t really do justice to the fact that we were staying IN A FREAKING CASTLE. An actual CASTLE. The ridiculousness of this situation as it pertains to me cannot be overstated. 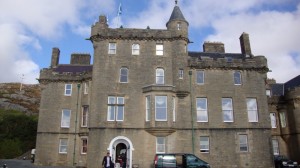 A path around the seawall led out to a rocky outcropping that had a splendid view of the castle, which would make a lovely weekend retreat if getting there wasn’t such an adventure. 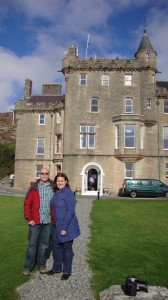 The castle has 12 bedrooms, and we only saw a few but apparently each one is more amazing than the next. Our room was The Scarp, which featured a four-poster bed in the bedroom and a huge bathroom outfitted in marble, featuring a gigantic clawfoot tub. The bedding was completely insane, with the hugest, fluffiest down comforter I have ever seen. A person could lay underneath this thing and you wouldn’t even know it because it was that fluffy. 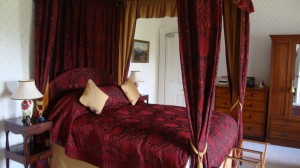 Our bedroom for the week

The number of things adorning the walls of this place is more or less incalculable. These spears were along the grand staircase, and became the center of many “hey, I’m looking for a weapon” jokes over the course of the week. 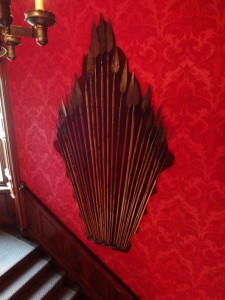 If you need a spear, I have some right here.

The day we arrived was really the clearest day we had, and this is one of the best photos I managed to get of the castle. Although the castle is quite large, there is a coziness to it that I didn’t expect. Obviously, the Hall family has amazing taste and the money to pull it off, but there was never a sense of it being just “for show.” They live there, it’s their home (well, one of them), and it didn’t have a hotel-ish feel to it at all. 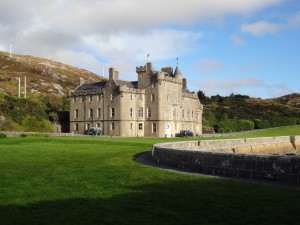 It was pretty windy out there on the rocks (though, compared to later on, that was just a pleasant breeze) but our friend Steve bravely took this shot of us. 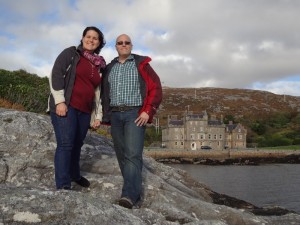 Braving the wind to get the shot!

They call it “the hill” but it is definitely a mountain. 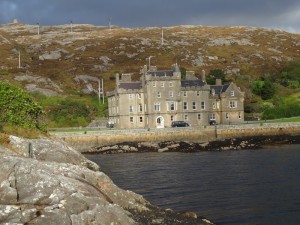 The castle with “the hill” behind it.

In the UK, they drive on the left side of the road, not the right. While we were in the van being driven to the castle, it wasn’t so strange to me (especially as I was in the very back of the van and busy looking out the window), but once we got in the car with Steve, it was like whoa. My brain was having trouble making sense of it, but luckily for us, Steve is from Manchester originally and is used to it. He was a good sport about doing all the driving while we were exploring. 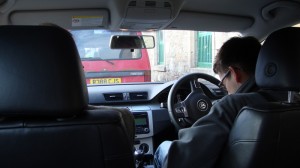 He’s on the wrong side!

Honestly, if Freddie or I would have been in charge of driving at all, I would have been worried. Not only do you have to remember to be on the correct side of the road, but it’s one lane anyway (passing places!) and 90% of the time there are sheep or cows on the roadway, straight chillin’. There are way more sheep than people on the island, so we had to nudge them out of the way from time to time. 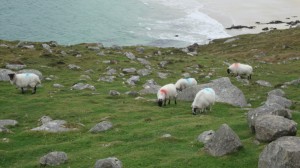 Whoever had the job of making the Passing Place signs was kept very busy for a time, because there are A LOT of them on the island. Every few meters, the road would balloon out in a half-moon, allowing cars to pass each other. There was a lot of waving and nodding going on, but on the whole, we didn’t see that many cars. 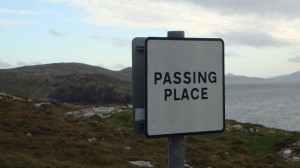 A good thing, too – the road was very narrow, barely wide enough for the VW Passat we were riding in. Later in the week, we had a VERY close encounter with a full-size 18-wheeler, which put us all in hysterics, but for the most part, driving on the Isle of Harris is an exercise in politeness. 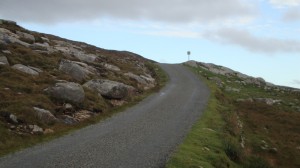 The beach was amazing. Completely unexpected, and beyond gorgeous. In New Jersey, we are more or less resigned to grey water and coarse sand, so this was just a surprise. The sand was bright white and very fine, and the water was a blue that I was not expecting, not at all. It was very windy down by the water (which probably explains the sand), and the rock pools were gorgeous and the whole thing was just very stark and beautiful. I’d been thinking about what it would take to live in such a remote place, but once I saw the beach, I totally understood. I could have stood there for hours, had I not been worried about freezing to death and/or having all the skin on my face sandblasted off. 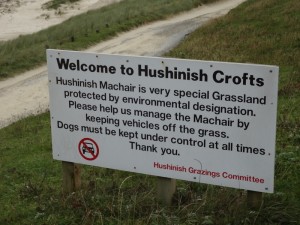 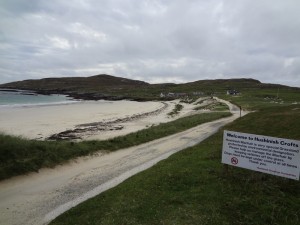 The beach. It literally looks like it’s at the end of the world. 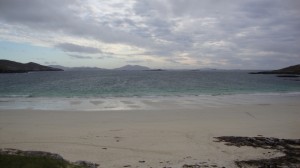 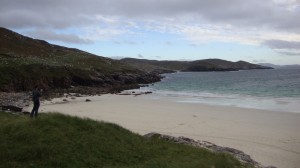 We didn’t swim. A plan was hatched at one point to do it, but it was mostly a joke. I think. Given better weather and enough of the estate’s whisky, who knows what kind of mischief we would have gotten up to? 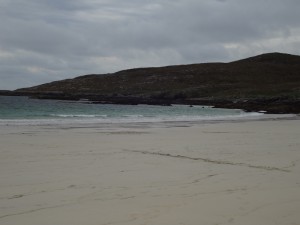 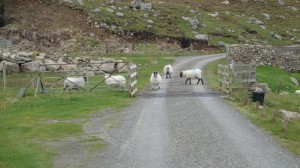 The sheep were being coy.

The landscape is so incredibly stark that the brilliantly-colored dyes on the sheep were startling. Amid a sea of browns and greens and greys, to suddenly see an electric blue or bright purple blot was a bit of a jolt. 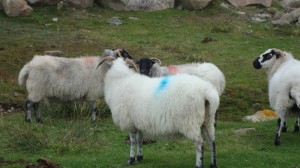 The dye indicates the sheep’s owner.

Here’s another view of the castle through the entry arch. I wasn’t able (well, let’s be honest: given the weather, I wasn’t inclined) to walk up to the arch on the other side and get a picture of the sign. “Amhuinnsuidhe” translates to “house at the mouth of the river” and is pronounced “aven-suey” (yeah… um. That’s Gaelic for you). 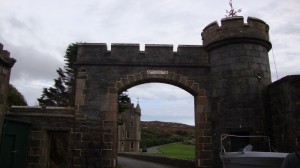 View of the castle through one of the entry arches.

The estate is used primarily for hunting stag and fishing, which helps the conservation effort as well. They have to hunt at least a third of the stag every year to keep the population down, otherwise they start coming down from the mountain and eating people’s gardens and generally being a nuisance. The guests go out with guides (called “ghillies”) and climb the hill to stalk the stag. This particular photo was taken in the Great Hall, and there was a stag at either end, actually. Off the Great Hall was the Drawing Room (site of afternoon tea and post-dinner coffee), the TV room, and the dining room, which I did not get a decent photo of, to my lament. 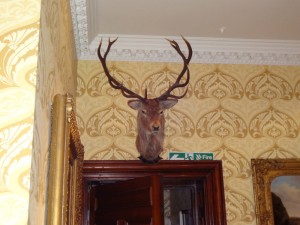 One of the many mounted stag heads around the castle.

Looking through my photos, it appears that the majority of non-landscape shots are of the Snooker Room. The company all ended up there after dinner each night, and with free and easy access to the drinks cabinet, much fun was had. Some of the best laughs and best times were had there.

At first, it seemed like a very strange way to have a vacation. We’re used to doing our own thing, setting our own schedule. This was different – the schedule was set, yes, but it was very loose and you could join in or not as you chose. Breakfast and dinner were communal meals, and having everyone hanging out together after dinner was just the best thing. Instead of being a bunch of people who happened to be in the same castle for the week, we became friends. 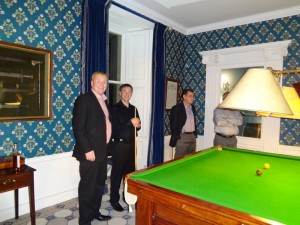 Comments Off on Scotland Adventure, Part The First

Filed under Me Me Me, Musing, Other People, Real Estate