2012 is going to be a year of change for me. So it seemed fitting that I should start the year making a major change to my body. I got a tattoo.

While I was getting it, Lou (my tattoo guy) and I were chatting and I was telling him about some of my adventures and he expressed surprise that I’d made it to age 36 without one. I can’t even settle down to a hair color for more than a month, how the hell am I supposed to deal with permanent ink on my body?

I’m a big fan of change. I like the idea that nothing is permanent, everything can be altered in some way. The outcome is never set in stone. So, no. No tattoos. I can’t even imagine that kind of shit my 18-year-old self would have chosen. And I know more than one person who got tattoos back then and I can’t imagine they love the Tasmanian Devil nearly as much now as they did then.

So I waited. I gave it a lot of thought, but could never really settle on something that I wanted to be a part of me, forever (or at least until I get old and it starts to meld into itself and become a shapeless black thingy). The idea actually came to me when I was pregnant with Jillian. I had only just discovered Editors and was listening to them more or less non-stop (some things maybe ARE permanent!) and during a particularly tough time, one of their songs spoke to me in a really profound way.

Fast-forward a few years, and my favorite band is putting out a boxed set. The first 200 people to order it get lyrics of their choice hand-written for them by the singer. I spent a good four hours making “squeeeee” noises and dancing around like a landed trout when I found out I was one of those 200 people (not to mention the way I acted once I actually received them), and when I got them in the mail, my choice was made.

Still, I sat on it for almost a year. I wanted to be sure. Then, last week, I finally made the appointment to have it done. And… it’s done. 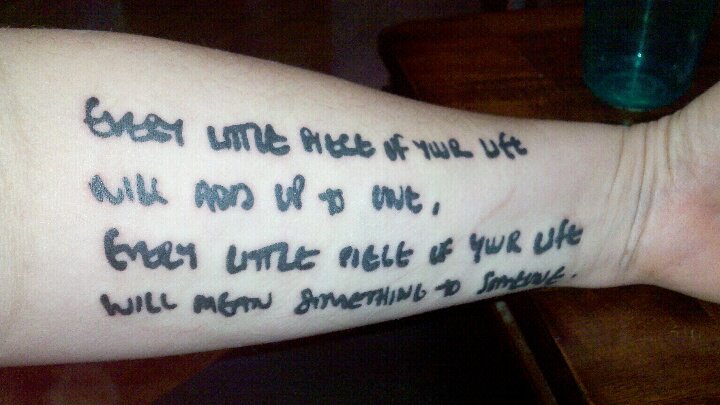 Comments Off on In Ink

Filed under Me Me Me, Music