By the second full day, it looked like weather and jet lag were catching up to me because I was not feeling super-great at breakfast. It didn’t help that the majority of the party were planning to go stalking all day, which would have been interesting to me on a dry day but with the wind the way it was, I knew I would be miserable doing that so I opted to stay in. My knees were giving me trouble just going up and down the stairs because I am a chubby geriatric sort of person who can tell what the weather is going to be based on what body parts ache. So after breakfast, I went back to bed for a few hours and it was the best decision I ever made.

Just across from the Picnic Room is the Luggage Room. It’s filled with things like life vests and Wellington boots and other bits and pieces one might need to add to her outfit if she were planning to go stomp around the hills all day. The hunting party started there, making sure everyone had Wellies and gear enough for their trek. Lunches were also made, and then they all gathered in the Fishing Room for a safety briefing. Or maybe that happened before they all gathered their gear. I don’t know for sure; I was napping.

The Fishing Room has wonderful maps of the estate, showing the various lochs and roads, as well as relief map showing the hills and likely places to find stag. There’s a big table in the middle and smaller tables around the edges, for tying flies and all the other things that go along with fishing and hunting. The photographs around the room show various guests and groups with their trophies, and on one wall is a collection of fish sketches, noting the details of who caught it, where it was caught, and just how big it was. 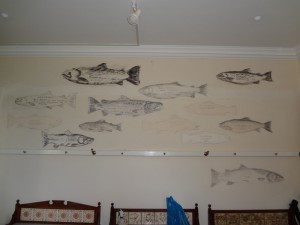 I went back to bed, snuggling happily under the VERY fluffy down comforter and had myself the best nap I’ve had in decades. I woke up feeling so much better and refreshed. I took my journal and my book down to the Drawing Room and settled in on one of the incredibly comfortable sofas to read and write and look out the window. A few times I caught myself feeling a little guilty because I wasn’t taking full advantage of this amazing castle, but then I realized that being able to sit in a quiet room to read and write at leisure is something I never, ever get to do.

Once in awhile, I would get up to stretch and think “hm, maybe I’ll go for a walk in a bit.” However, the very second I would stand up to go get my shoes, I’d glance out the window to see that it was raining. This happened at least six times, so eventually I gave up and figured that the universe wanted me to have a nice, relaxing day. So that’s what I had. At one point, I moved out of the Drawing Room and into the TV Room, where I found Reed doing exactly what I was doing – precisely nothing. We had a good time flipping channels and wondering what the hunting party was up to.

It turns out, they were up to braving the weather, mostly. After some shooting practice, they set out up the hill. Freddie reported that they didn’t follow any kind of path or do any kind of switchbacks in order to go up, they just clambered up after the ghillie as best they could (My Knees: “Oh, HELL NO”) and tried to keep pace. 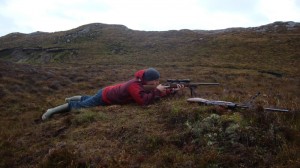 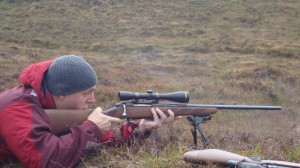 From what I heard, the wind was astounding up on the top of the hill. It was amazing enough down at the castle, I can’t imagine what it would have been like without any windbreaks. 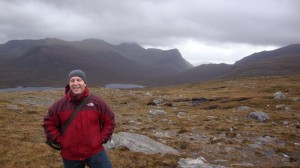 Freddie in the wind 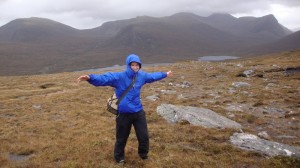 Stalking the deer is an exercise in walking and patience. When they finally did get themselves in a good position to get a shot, Freddie reported that he was all set up, ready to shoot, and the stag… walked away. I’m not sure how excited I would have been had he returned to the castle with a deer head, but it was cute how excited he was. 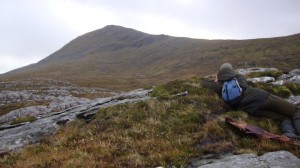 Peeping over the ridge

Not to change the subject, but…

All the best country houses have resident ghosts, and Amhuinnsuidhe Castle is no exception. The rumor is that Lady Sophie Scott (whose remains lie with those of her husband in the cairn up the hill from the castle) still checks in from time to time. Over the years, various guests have reported feeling chills and seeing reflections of things that aren’t there in windows and mirrors.

At dinner that evening, I finally managed to get up and get some photos of that magnificent dining room. The following is a shot of the tapestry above the fireplace. 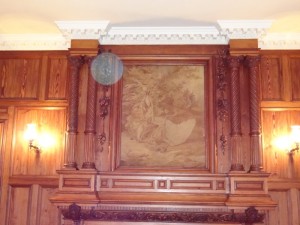 Lady Sophie is in the top left.

Occasionally, ghosts (or whatever you wish to believe they are) can be caught in photographs. They tend to show up as smears of light or bluish orbs, and are usually explained away by skeptics as smudges or dust on the camera lens. I grew up in a house that had at least three ghosts (so I’m in no way a skeptic), and I am certain that this is Lady Sophie. I took the photo below about three seconds after the other one – the hair on my arms was standing straight up, and my ears started ringing. Do with that what you will, but if it were dust on the lens, it would have shown up again, don’t you think? 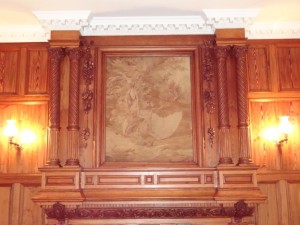 My journal is utterly hysterical on the subject of meals. I had originally planned to transcribe it verbatim, but after reading it over, I decided against that because I tend to ramble and repeat myself a lot (not that I’m not doing that here). The first night, I described dinner in detail, discussing how amazing the meal was. Each meal was more amazing than the next, and by the time I got to the third dinner, the journal simply says “Dinner = OMG.” After dinner, drinks were happening and at least one necessary bottle needed to be replaced (I don’t even remember what), so Mrs. Hall invited Steve and me to join her on a trip to the wine cellar. I certainly don’t need to be asked twice, so away we went. 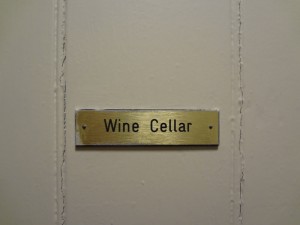 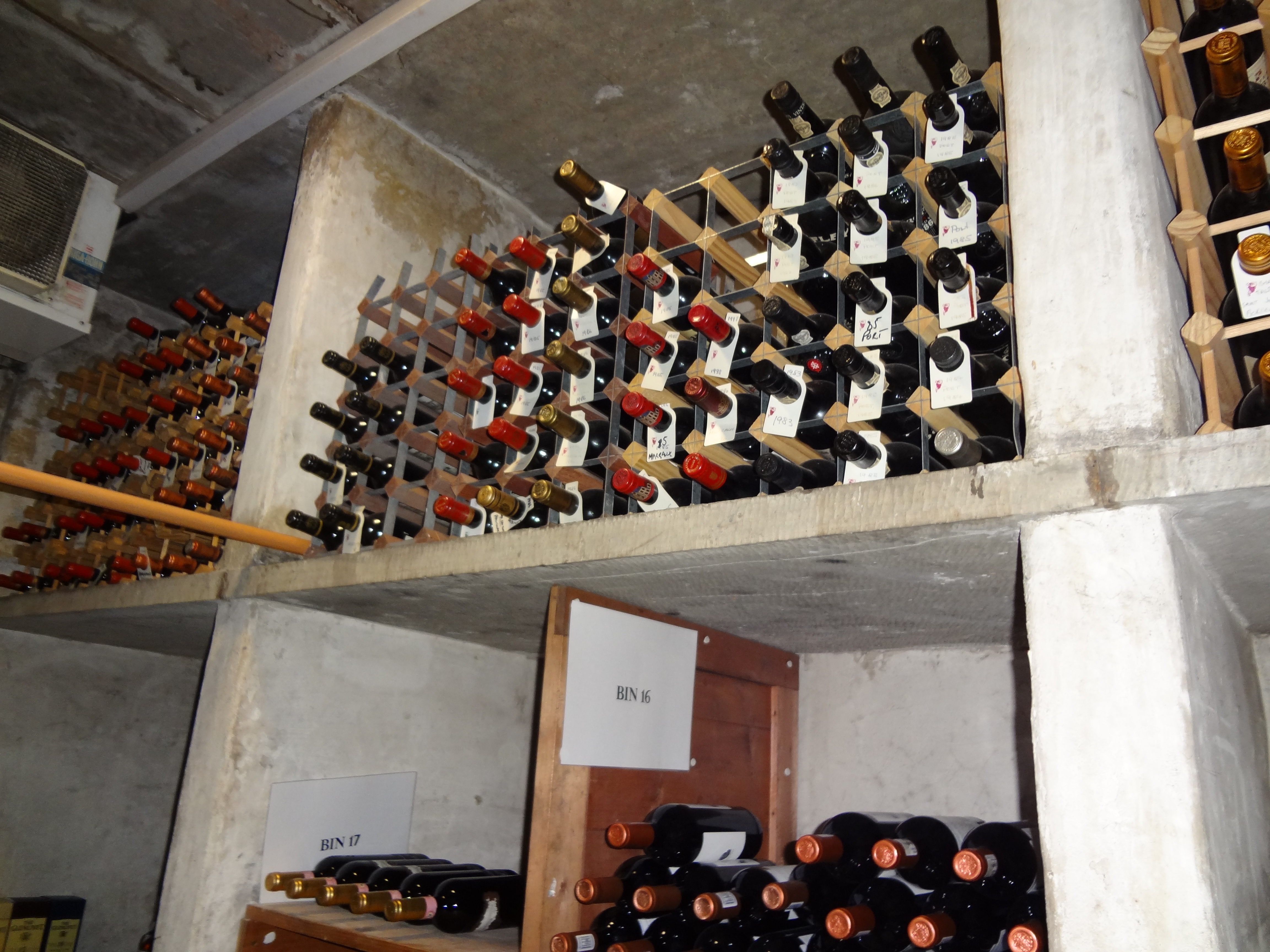 I could get through these in about a week.

I don’t know that I could ever be a wine collector. I’m an enthusiastic wine drinker, for sure, but to collect it? That’s just not my thing. I am, however, quite impressed with the collections of people who do it, because they do end up with some rare and interesting bottles. Mr. Hall has been collecting wine for about 40 years, and he’s got quite an array. His personal collection was housed on the top shelves of the cellar, so I didn’t get a chance to really peek at the labels. I’m sure Mrs. Hall would have produced a ladder out of thin air if I had asked, though. That lady is magic. 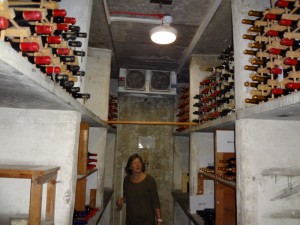 Mrs Hall in the wine cellar

Because the castle is also one of the Hall family’s homes, they have their own private kitchen and sitting room off to the one side. Mrs. Hall graciously allowed Steve and me to go in and look around and I have to say, it’s pretty much the best kitchen I have ever seen. I think the entirety of the downstairs of my house would fit in there comfortably. The room was beautifully laid out, painted a cheerful yellow, and featured a tiled backsplash that was just… right. There’s not really any other way to put it. That room is a wonderful example of harmony, and it reflects the personalities of its owners in that it is warm and welcoming and completely comfortable. 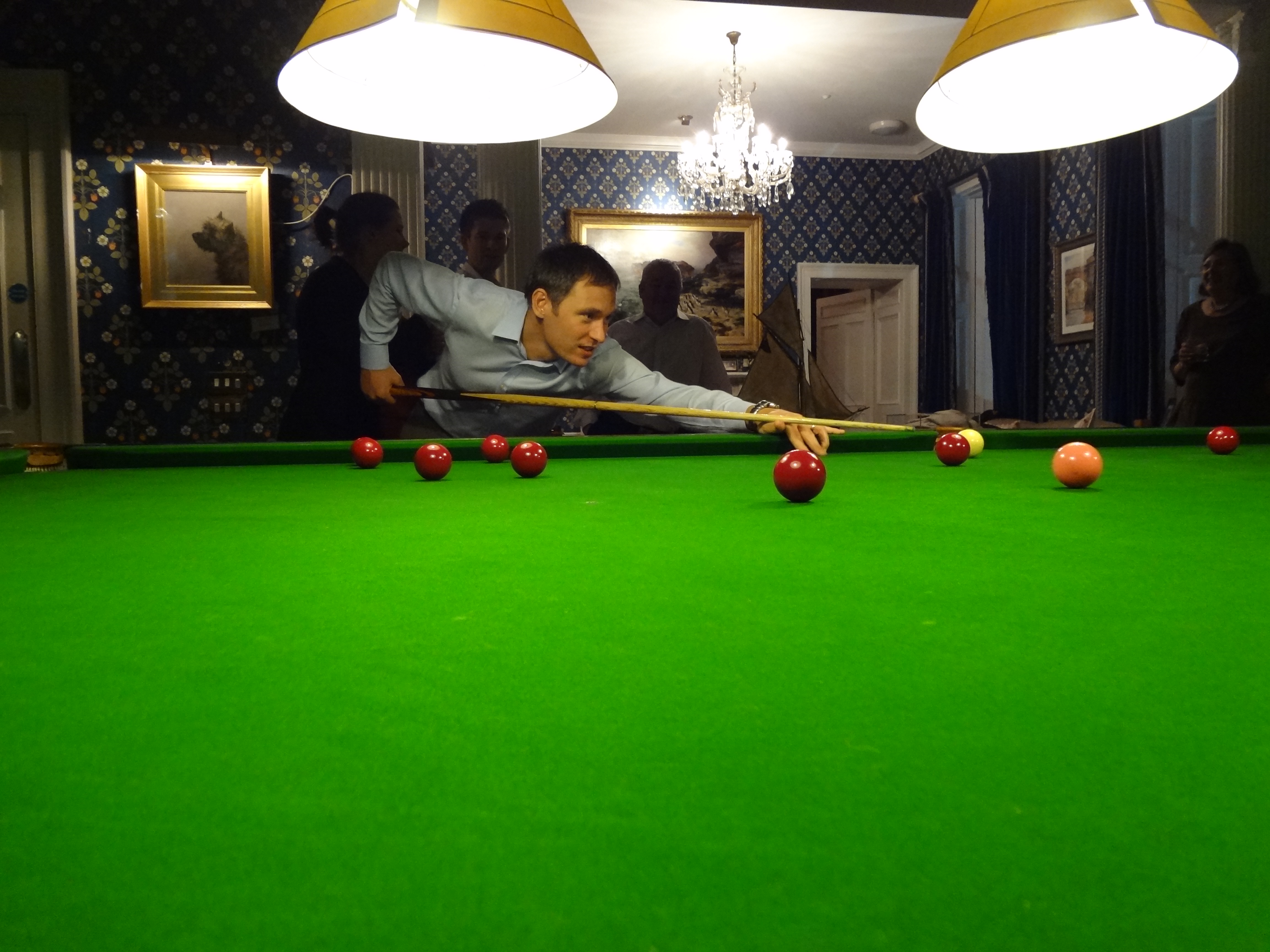 Yes, of course there was snooker after dinner. It became something of a joke whenever Frankie would play, because he would inevitably end up wanting to go to bed but still be in the game. At one point, he was begging people to let him lose.

Filed under Food, Freddie, Friends, Me Me Me, Musing, Other People

2 Responses to Scotland, Part The Third