Of our two dogs, it is universally acknowledged that Ellie is “the stupid one.” She’s sweet and adorable and profoundly not smart.

Piper, on the other hand, is a quick learner and will happily do all the tricks she knows. She’s very sharp.

Yesterday, I had half a stick of butter out on the counter (pushed way back, because dogs) so it could soften enough for me to use it for something. When I went to get it, it was gone.

I’d been putting things away and doing general straightening so I thought maybe I’d put it back in the fridge. I did not.

It was gone. I figured one of the dogs ate it, since they have a history of stealing butter off the counter (Ellie) when they think I’m not looking. So I looked around to see if I could find the bit of wrapper or something. No dice. Nothing. No evidence at all!

My guess was that Ellie had gotten it, since it was really pushed back on the counter and she is taller than Piper is. She will also eat literally anything, whereas Piper is a bit more fussy in her choice of foods.

Turns out, I was wrong. It was PIPER who ate it. She decided to barf all over the floor and there were bits of butter wrapper mixed in with the grass she was obviously eating due to an upset stomach FROM EATING ALL THE BUTTER.

Comments Off on Lessons learned (probably not)

The differences between the dogs

It’s snowing. A lot, actually, which means I am not going to be spending any significant time outside today.

This means that the dogs will go out into the backyard to do their business, instead of going walkies around the block. I’m fine with this.

There are differences in how the dogs approach this, however.

Piper: half German Shepherd, half Border Collie (approximately). Born and raised in NJ. Has ALL THE HAIR. Literally, three or four layers of hair. LoooooOOOOOOoooves the snow, and will happily run around in circles for hours.

Ellie: half Black Lab, half Pit Bull (we think). Born and mostly raised somewhere in the South (we think). Not a lot of hair on this dog. She only has a thin coat, and her belly is mostly bare. Hates the snow. Will go out, do her thing, and sprint back to the door in record time.

Piper will get bored in about an hour and start agitating for another trip outside. Ellie can and will wait until she is about to burst before she feels the need to go out again. Ellie wins this round.

Comments Off on The differences between the dogs

Things We Know About Ellie

We acquired an Emergency Backup Dog last November. We found her through Petfinder, and after talking with the woman who was fostering her, we met them and Ellie came to live with us.

At the time, the foster woman was supposed to get us some information on Ellie’s background, including vaccination paperwork and the like, but none of that ever materialized. Ever. The only thing we knew for sure was that Ellie had been spayed, since her belly was shaved and she had obvious stitches.

We have no idea how old Ellie is. She could be anywhere from 2 to 15 years old. I think she’s more on the young side, because when she arrived she was very much a puppy (albeit a 50-lb puppy). Other than the fact that she’s been spayed and she came from “somewhere in the South,” we didn’t know anything about her, at first.

She’s been with us for nearly a year now, and we have learned some things.

2. Ellie does not like motorcycles or cars that rev. There are a couple of teenaged boys in our neighborhood who are doing things to their cars, and sometimes if I’m out for a walk with Ellie, they will be working on their cars, revving them and generally pretending to be all fast and furious. When this happens, Ellie will not move. No way, not today.

3. Thunderstorms are not Ellie’s favorite thing, either. There haven’t been many since she arrived, but she has tried to hide behind the toilet, under the futon, and in the refrigerator. She weighs close to 80 pounds now, so imagine what that looks like, trying to wiggle under the futon. If I’m around, she will sit on my lap or do her level best to get me to step on her since she needs to be under my feet if she can’t get behind the toilet.

4. Ellie loves me. All the other animals in the house tolerate me (Carl) or actively dislike me (Piper), but Ellie looooooves me. I love her back because she is so incredibly stupid and sweet. Not a smart dog, but very very sweet, and she tries so hard to figure out what you’re trying to get her to do. Still hasn’t mastered “shake hands” but she does try.

5. Ellie is, as I said above, incredibly stupid. They say you can’t teach an old dog new tricks, but you can’t teach a stupid dog ANY tricks. She knows “sit” but that’s the extent of her knowledge.

6. Ellie believes that cats are snacks. It took us nearly 5 months to convince her that Carl is an exception to that rule.

7. Ellie hates the UPS truck. And when I say “hate” I mean she really, really, really, REALLY detests the UPS truck. She lost her mind barking the other day and I couldn’t see any other dogs or other barkable offenses out the window, yet 5 seconds later, the UPS truck passed the house. The dog knows the sound of the UPS truck before she even sees it. That’s cold, man. The FedEx truck doesn’t bother her at all, but hoo boy, she sees that brown truck and tries to kill it with barking.

We love her, though. She’s a fantastic addition to our menagerie and even though she’s dumb, she’s incredibly photogenic. The pretty ones are always stupid. 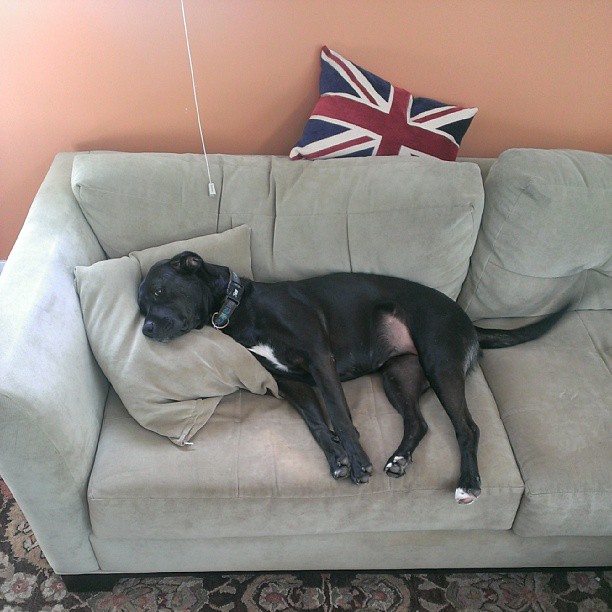 Comments Off on Things We Know About Ellie

The new dog is forcing me to keep the house a tiny bit less cluttered. I’m not sure how I feel about this.

I require a certain amount of clutter in my life. Whenever I’m in someone else’s house and it looks like a page from a Pottery Barn ad, I wonder “where is all your stuff?” Some people don’t require a lot of stuff and that’s fine, but EVERYONE has SOME stuff.

I have a lot. Books, magazines, notebooks, yarn, more books, more yarn, the other notebooks… there’s a lot. It piles up. To the untrained eye, it looks like piles of things. And it is. There is such a thing as the File Pile and it doesn’t take me long to put my hand on whatever I’m looking for. I understand that this is not the optimum way to organize one’s life, but I have tried other ways and… this is just the way I’m made.

When Piper was a puppy, we had to keep the house fairly de-cluttered because she chewed things. When she eventually got over that, we gradually let the clutter re-form. But now that Ellie is here, the clutter has had to beat a hasty retreat.

Sometimes, we fail. For instance, the first round of Xmas gifts we’d bought for my mom became victims of SuperStorm Ellie. She ate them, because she is an asshole. She has also eaten one of my yoga blocks, countless items from the bathroom trash, Tupperware (and contents), my favorite sandals, Freddie’s shoelaces, a Barbie doll, a bath toy, 2 towels and a blanket. SO FAR.

She’s a menace. And, since we know so very little about her, I have no idea if she’s going to grow out of this phase or if it’s just how she’s made. We’re done for.

Comments Off on By Force